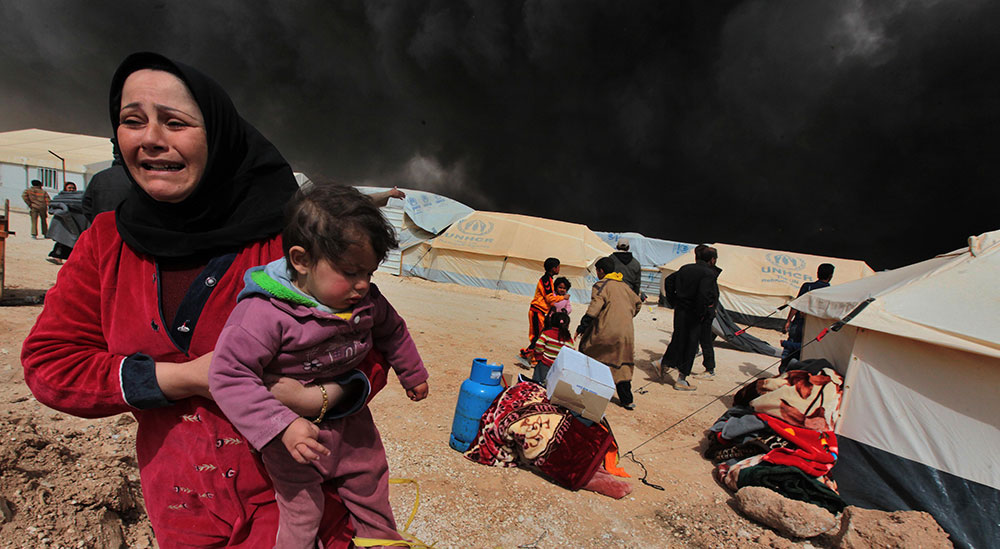 How Should We Respond to Refugees?

This week has been a difficult week for many. We watched in horror as ISIS extremists killed over 150 innocent people in France in the name of God. Similar attacks occurred in Lebanon and Kenya.

Trying to explain that reality to our kids, especially our youngest, is not as easy as you would think. In fact, I can’t imagine how parents directly affected by the attacks were able to explain it to their kids, though you can see one dad’s attempt here…

Along with the war going on with ISIS and the rest of the world is a massive group of people that have been traumatized and have fled their homes from Syria due to civil war. It is estimated that 200,000 Syrians have been killed in this conflict and 12,000,000 have fled.

Over half of that number are children. 6 MILLION CHILDREN are running for their lives with little or no support. They have no where to go without nations opening their arms to them…but should they? With ISIS claiming they will infiltrate the entire world while posing as refugees?

Several attacks have been ongoing since the Paris attacks and even this morning, 10 armed men stormed a hotel in Mali where security guards were killed and dozens were taken hostage. Fear is on the rise.

So, what should be our response to this massive refugee crisis? Should we bring as many as possible to the US or keep them out to ensure ISIS isn’t among them? Though the arguments raging on social media point to a simple answer one way or the other, the real question is…how should Christians respond? The best way for us to know is to simply see what God has already taught us in His Word.

1. Jesus loves the oppressed and was always open to them.

“The Spirit of the Lord is upon me, because he has anointed me to proclaim good news to the poor. He has sent me to proclaim liberty to the captives and recovering of sight to the blind, to set at liberty those who are oppressed, to proclaim the year of the Lord’s favor.” Luke 4:18–19 (ESV)

People like the refugees were THE people that Jesus was constantly focused on…the weak, the needy, those unable to care for themselves.

2. We must not oppress those in need.

“You must not oppress foreigners. You know what it’s like to be a foreigner, for you yourselves were once foreigners in the land of Egypt. Exodus 23:9 (NLT)

This was written to surviving refugees from Egypt, though Christians are still foreigners in this world. Our home is not of this world any longer. How can we not feel the plight of those who are?

3. Jesus taught us to care for those that we could.

34 “Then the King will say to those on his right, ‘Come, you who are blessed by my Father, inherit the Kingdom prepared for you from the creation of the world. 35 For I was hungry, and you fed me. I was thirsty, and you gave me a drink. I was a stranger, and you invited me into your home. 36 I was naked, and you gave me clothing. I was sick, and you cared for me. I was in prison, and you visited me.’
37 “Then these righteous ones will reply, ‘Lord, when did we ever see you hungry and feed you? Or thirsty and give you something to drink? 38 Or a stranger and show you hospitality? Or naked and give you clothing? 39 When did we ever see you sick or in prison and visit you?’
40 “And the King will say, ‘I tell you the truth, when you did it to one of the least of these my brothers and sisters,* you were doing it to me!’ Matthew 25:34–40 (NLT)

4. God judges those who can help others but choose to only help themselves.

49 Behold, this was the guilt of your sister Sodom: she and her daughters had pride, excess of food, and prosperous ease, but did not aid the poor and needy. Ezekiel 16:49 (ESV)

The sin of Sodom was not what you think it is. It was withholding help from those in need.

5. We have an obligation to deliver victims from their oppressors.

Jeremiah 22:3 (ESV)
3 Thus says the LORD: Do justice and righteousness, and deliver from the hand of the oppressor him who has been robbed. And do no wrong or violence to the resident alien, the fatherless, and the widow, nor shed innocent blood in this place.

6. Safety should be a concern, but not the only one.

16 “Behold, I am sending you out as sheep in the midst of wolves, so be wise as serpents and innocent as doves. 17 Beware of men, for they will deliver you over to courts and flog you in their synagogues, 18 and you will be dragged before governors and kings for my sake, to bear witness before them and the Gentiles. 19 When they deliver you over, do not be anxious how you are to speak or what you are to say, for what you are to say will be given to you in that hour. 20 For it is not you who speak, but the Spirit of your Father speaking through you. 21 Brother will deliver brother over to death, and the father his child, and children will rise against parents and have them put to death, 22 and you will be hated by all for my name’s sake. But the one who endures to the end will be saved. Matthew 10:16–22 (ESV)

There is so much in these few verses…we must be wise…but we will be taken advantage of. Those who believe our borders should be open to every one no matter what are well-intentioned but are not exercising wisdom. It is unclear what the best way for us to help is, but we must help. Safety is a very real concern, however, safety is not the primary concern for the true follower of Jesus.

Following Jesus is more than going to church, it’s following His heart.
There are so many complex issues that can’t be answered in simple arguments, but the idea that we would ignore 12,000,000 widows and orphans breaks the heart of God.

May we pray for wisdom and the courage to be His people in this time.