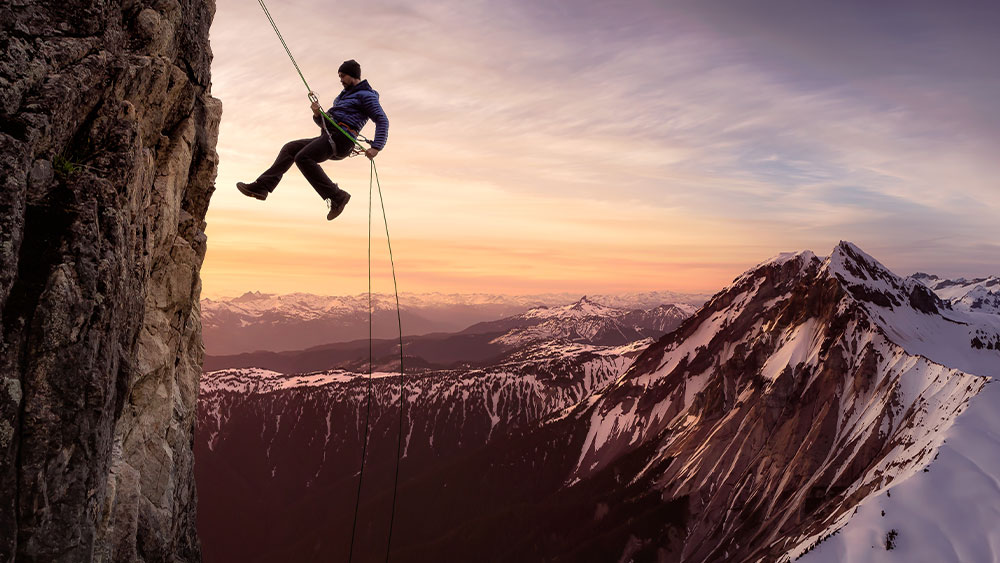 Not afraid to jump!

I remember the first time I ever went rappelling as a kid. It was at a summer camp where I would eventually become a staff member and meet Deidra, who I would eventually go on to marry (without some opposition from her, btw…but that’s another story 🙂 ).

That year, I noticed this massive tower extending well beyond the top of the mountain where the Dining Hall stood. It was made of timbers, telephone poles and 2×4’s and it was magnificently high. Rappelling was a new activity for this year and like all of my friends, I wasn’t going to miss it!

Every time we went to eat breakfast, lunch or dinner, we walked past this fantastic wooden monolith and it was just begging to be climbed…but we had to wait. Day after day, we waited.

Every now and then we would see a counselor or staff member making the long climb to the top to eventually rappel down the other side. We were like kids at Christmas waiting for the day that we would conquer one of our greatest fears and claim our place in the annals of real men…or so we thought.

When the day finally came, we were all super excited for our turn on the ropes.
(Side note: towers are a whole lot taller when you are standing at their base…a lot taller.)

One by one, we ascended this monstrosity of human engineering completely afraid to look down and one by one, we waited for those in front of us to slowly sit back into their harness while their center of gravity slowly edged over the side until they were supported only by a small rope and harness. We were certain that if anything went wrong, we would surely die.

As I arrived at the top all of my excitement immediately turned to fear. How high were we? Is this really safe? Has anyone died on this contraption? I can’t do it…it’s too much…who wants to be a real man anyways…

All of those thoughts went through my head and if my friends were honest (which they weren’t) they went through their heads, too.

What would we do? Is it even possible to climb down? I think I would like to try! Who even climbs these tall death traps only to go back down on a rope? Who thought this up anyways?

My adrenaline was pumping and man was I sweating, but I eventually got geared up and turned around to sit back over the side just like all of the other kids had already done. I don’t know how long it took or how much cajoling the staff had to do get me to move my center of gravity over the abyss but I did…and I took a step…and another step…and another step…
“Oh wow, I’m already on the ground?!”
“I’m still alive?!”
“That was awesome! And so easy!!!!!”

Well it wasn’t easy and not one of us would have said that if we were really honest but I’m so glad I made the jump. I’m so glad I faced my fears. I’m so glad I got to experience the elation of trusting the rope and stepping out over the abyss.

I have remembered that day till this day and I often think about it when I’m trying to do something hard. Just take the step. Just make the jump. Go for it. It’s scary but it’s going to be awesome!

I could never have imagined how important that step would be for the rest of my life. It’s how I learned to trust ropes so I could go rock climbing as a “young”er man.  It’s how I was able to tie off on tall houses as I worked my way through school. It’s one of the reasons I learned to love the mountains and take (measured) risks. It’s a filter that hard things now go through.

Sometimes the hard things prepare us for some of the greatest things in life.
So why am I telling you this story?

This weekend we will baptize some more friends at Journey and I couldn’t be more excited. Getting baptized is a huge step for someone to take. It’s a symbol that we are choosing to accept Jesus Christ as our Savior and tell others that we are choosing to follow Jesus with our lives. It’s not magical or supernatural. You don’t see God of have a dove come and land on your shoulder like it did for Jesus and I’ve never heard of anyone hearing a voice from heaven as they come up out of the water, but it is a significant step, nonetheless.

It’s a step that some are as frightened of as I was when I was standing on that tower. Will they take the step? It’s a big step.

Don’t miss out on taking the big steps in life. When there’s a chance to jump, jump. Nothing has shaped my life more than the moment I chose to know and follow Jesus. It’s not the only step. In truth, it’s just the first of many where you ask some of the same questions I did when I stood on the tower.

It’s not safe.
A lot could go wrong.
If we believe Jesus, you may die.
But…this is part of the journey and if I thought rappelling was exciting, knowing and following the creator of all things is so much more.

Don’t be afraid to jump.
There is so much out there if you do.